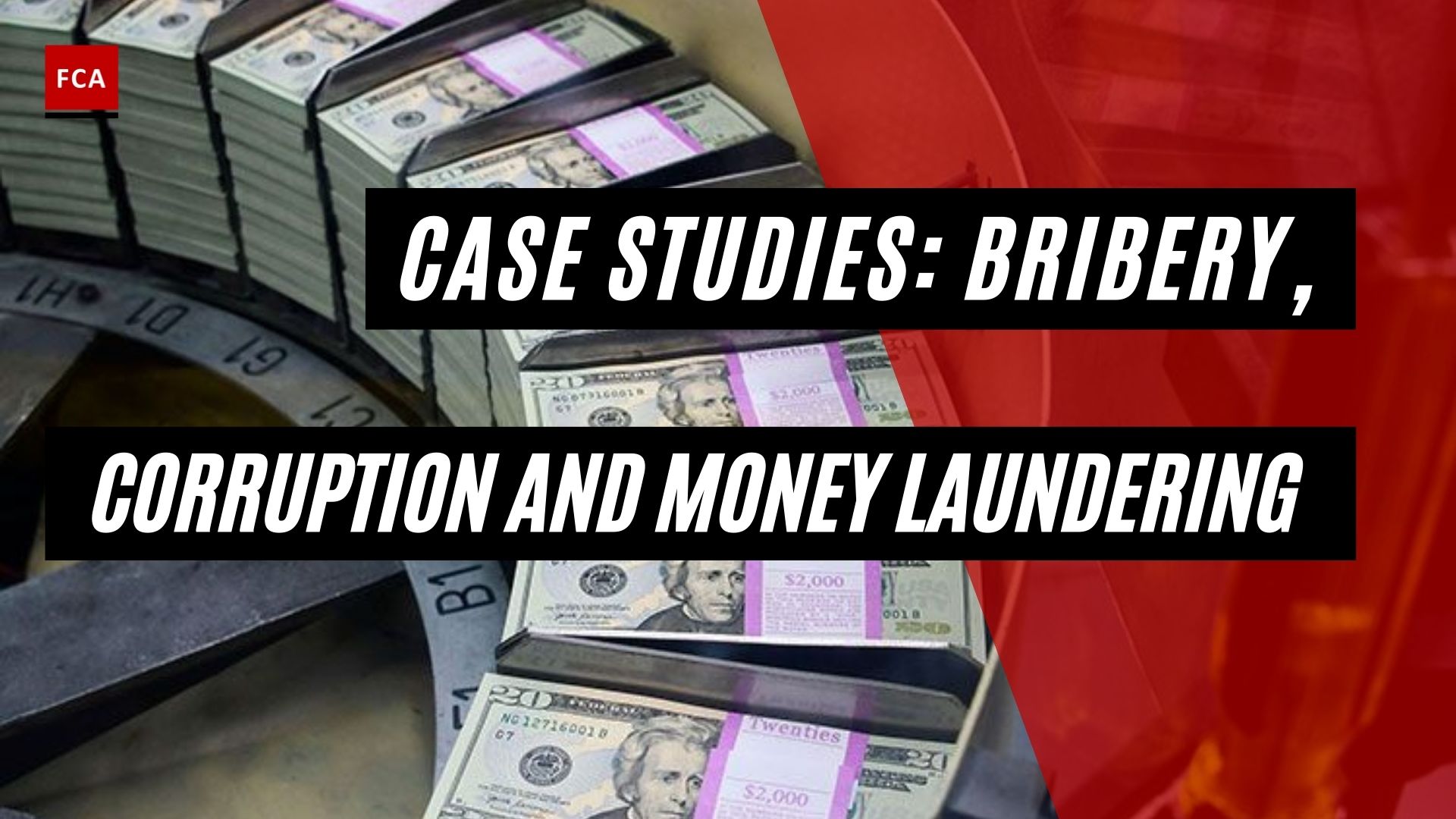 Bribery allows corrupt individuals to conveniently launder their income, and bribery allows launderers to avoid all controls and sanctions. According to IMF research, countries with little control over corruption tend to perform poorly in terms of Anti-Money Laundering and Counter-Terrorism Financing (AML / CFT) standards.

Money laundering and corruption must be dealt with seriously. Due to the negative consequences of corruption, strict rules must be established and enforced in all developed countries, particularly in developing countries and countries with fragile economies.

Gaps in the law facilitate money laundering and terrorist financing. These crimes are severely avoided if there are regular and systemic corruption regulatory and legal AML / CFT regulations.

Case Study 1: Odebrecht Scandal: How Brazilian Politicians Were Bribed And How The Money Was Funneled

In October 2012, the Supreme Court of Brazil announced guilty verdicts against 25 politicians, business executives, and operatives, on television, all of whom were involved in a congressional vote-buying scheme, which shocked the people of Brazil. 12 of the 25 individuals convicted received lengthy prison sentences, which was unprecedented in a nation where the powerful had  benefited from a culture of impunity since its formative years as a Portuguese colony.

This case is about combating corruption, especially systemic corruption, which represents the country’s institutional, political, and economic scenarios.

Within two years, in 2014, an investigation was launched by the federal public prosecutor’s office into alleged corruption at the government-owned energy giant Petrobras, where a cartel was formed at the highest levels between the officials of Petrobras and senior executives of Brazil’s largest construction companies, which were designed to skim millions of dollars off of the contracts, to develop rich offshore oil fields.

It was the scale of “systemic corruption” in Brazil and evidence that impunity was no longer guaranteed. Systemic corruption may be characterized as a situation where major organizations and processes of the government or state are used by corrupt individuals and groups and in which most of the people have no alternatives to dealing with the corrupt officials. Due to systemic corruption, the damages imposed on Brazil implemented by political forces in the last two decades are unprecedented, compared to any other country.

The Petrobras corruption scandal, the largest in Brazilian history, was named “car wash” in Brazil to launder the illicit money. Operation Car Wash began in March 2014 as an investigation into allegations that executives at the state oil company Petrobras had accepted bribes from construction firms in return for awarding them contracts at inflated prices.

As the operation expanded far beyond Petrobras, hundreds of government officials, politicians, and private sector executives were arrested, tried, sentenced, and sent to jail. Among them were also a former Speaker of Chamber of Deputies, “Eduardo Cunha,” who previously launched a successful impeachment against the President “Dilma Rousseff,” and the former President of Brazil “Luiz Inácio Lula da Silva.” Three years after the investigation began, Lula was found guilty of the first of five charges against him that he had been given a beachfront apartment by engineering firm OAS in return for his help in winning contracts with Petrobras.

Yet, the legacy of Operation Car Wash is complicated. It has come under scrutiny for its controversial use of plea bargains and pre-trial detentions and a seeming willingness, on the part of some of the officials involved, to bend the rules in pursuit of convictions, leading to allegations that the probe was being used for political ends. Everyone connected to the Car Wash scandal received a bribe in various forms, including luxury cars, expensive artworks, expensive watches, etc.

Federal Judge Sérgio Moro, who had worked in the earlier investigation of the vote-buying scheme in Congress, emerged as an early champion of Operation Car Wash, which he turned into a crusade to expose and punish “systemic corruption” in Brazil with enormous popular support. On Sunday, March 13, 2016, some 3.4 million Brazilians took to the streets in 262 cities to protest against the Petrobras corruption scheme. People asked for the moralization of Brazilian politics.

There was one more scandal that involved those at the highest level, Odebrecht, which has also been caught in Operation Car Wash. The former CEO, Marcelo Odebrecht, was found guilty of paying more than $30m (£21m) in bribes to Petrobras officials in exchange for contracts and influence.

The massive scandal also had the net effect of discrediting all members of the political establishment and opened a path for Congressman Jair Bolsonaro, a former army captain who had been pushed out of the military, to mount a successful presidential campaign in 2018. Once elected, President Bolsonaro named Sergio Moro as his Minister of Justice and Public Security. Arguing that, as a minister, he could take the fight against corruption to a new level, Moro joined the government, but in doing so, he strengthened concerns over the politicization of the operation. The decision marked the effective end of Lava.

What, then, are the legacy and lessons of Operation Car Wash?

Born from a proposal developed by Sao Paulo state prosecutor and a law professor named Fabio Bechara, a Global Fellow of the Wilson Centre’s Brazil Institute, an analysis of the impact of Lava on systemic corruption and impunity in Brazil was performed. Operation Car Wash was the beginning of a transparency process. It was also a watershed moment for Brazil and others that wanted to develop better transparency, mechanism, knowledge, and deeper partnerships in Brazil and abroad to investigate and prosecute the systemic corruption. However, it will still take time and considerable persistence to establish a culture of transparency and accountability in Brazil.

Case Study 2: 1MDB: How Malaysian Politicians Were Bribed And How The Money Was Funneled

The 1 Malaysia Development Fund Bhd (1MDB) scandal is one of the most serious corruption scandals on record. It involved the embezzlement and laundering of billions of US dollars from its accounts together with gains from bribery and bond pricing, facilitated by false declarations by the officials and others involved.

The illicit money was transferred and laundered outside Malaysia. A cohort of senior government officials, bankers, and businessmen from Malaysia, and some from Saudi Arabia, UAE, and other countries have been implicated in this scandal.

Increasingly, from 2016, the spotlight has been placed on the former Malaysian Prime Minister, Najib Razak, who was also the Chairman of the 1MDB Advisory Board, his wife, Rosmah Mansor, and Low Taek Jho, a Malaysian businessman and associate of Najib. He is alleged to have been the mastermind behind this scandal.

The scandal involved embezzlement, bribery, false declarations, and bond mispricing relating to extensive borrowing by 1MDB and involved a global network of shell companies and individuals through which the illicit money was passed. It also showed the weak governance in 1MDB, poor internal controls within banks, the failure of watchdog and enforcement bodies to take the necessary action partly due to political control over them, and overall the lack of political will to deal with the scandal.

The scandal came to light in 2015 and gave rise to investigations in Malaysia and other countries where embezzled and other illicit money was deposited and laundered. 1MDB began as the Terengganu Investment Authority (TIA), launched by the Menteri Besar (Chief Minister) of the State of Terengganu, Ahmad Said, in February 2009. It was set up as a holding and investment company for the State and was funded initially by a bond issue of RM5 billion (US $2.69 billion).

1MDB had several sources of funding. The initial source was the funds of TIA, mainly derived from a conventional bond issue, transferred to 1MDB on its formation in 2009. The second source of funding was Islamic bonds or Sukuk issues for a medium-term in 2009 and a short-term note issued in 2014.

In September 2009, it changed its status to a Malaysian national investment fund under the name of 1MDB, wholly owned by the Malaysian Government through the Ministry of Finance Inc. From 2009 to 2015, 1MDB created numerous subsidiaries in its own right. Particular mention should be made of SRC International Sdn Bhd, whose remit was to borrow funds from the civil service pension fund, Kumpulan Wang Persaraan (KWAP).

Bribery also figured in the 1MDB scandal. Bribes were offered by Goldman Sachs and accepted by officials in 1MDB and the Malaysian Government to allow Goldman Sachs to arrange and underwrite the bond issues in 2012 and 2013 for a very high underwriting fee.

Some of the most effective and useful ways to combat corruption are the rules that countries use to combat money laundering and terrorist financing (ML / TF). Corruption is a major source of illegal income. These revenues are obtained through crimes such as bribery, embezzlement, abuse of functions and power, and other illegal means in both the public and private sectors.

Corruption is frequently used to obtain an unfair advantage. Corruption proceeds are frequently laundered in order to avoid detection and increase maneuverability with this revenue. As a result, corrupt officials and individuals take great care to conceal their identities in order to deposit illegal proceeds from corruption into the financial system without being detected and to purchase assets. 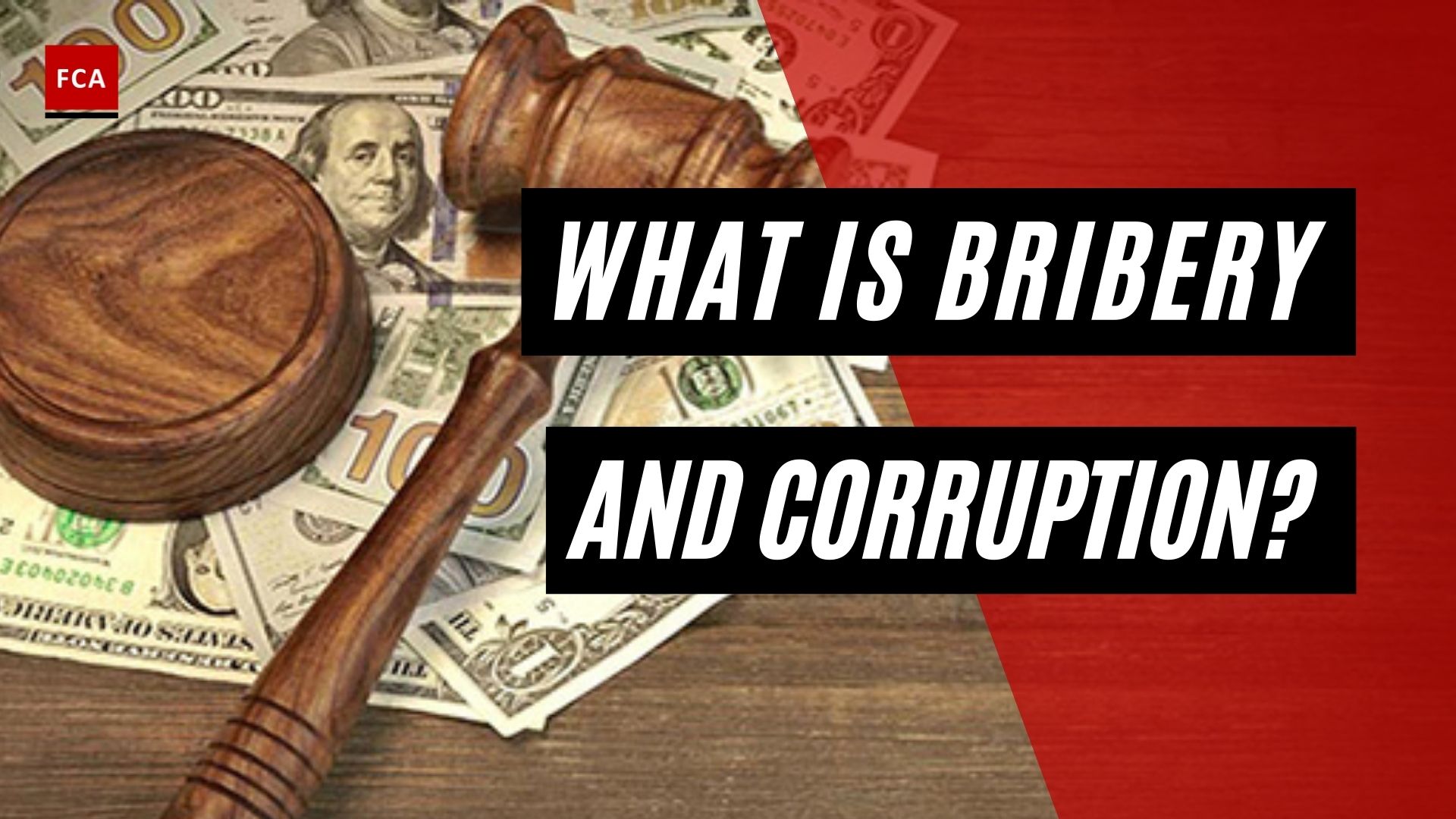 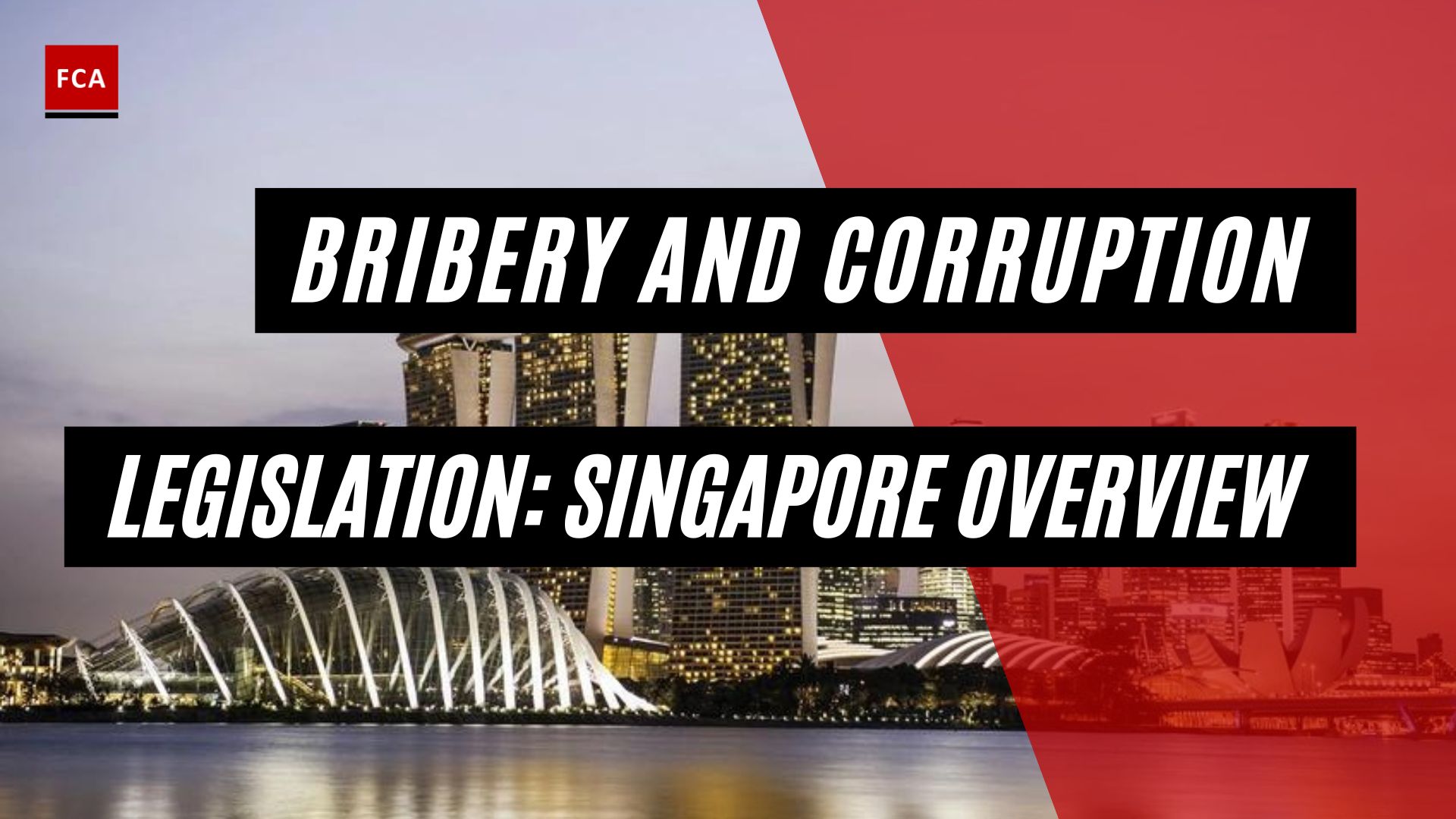 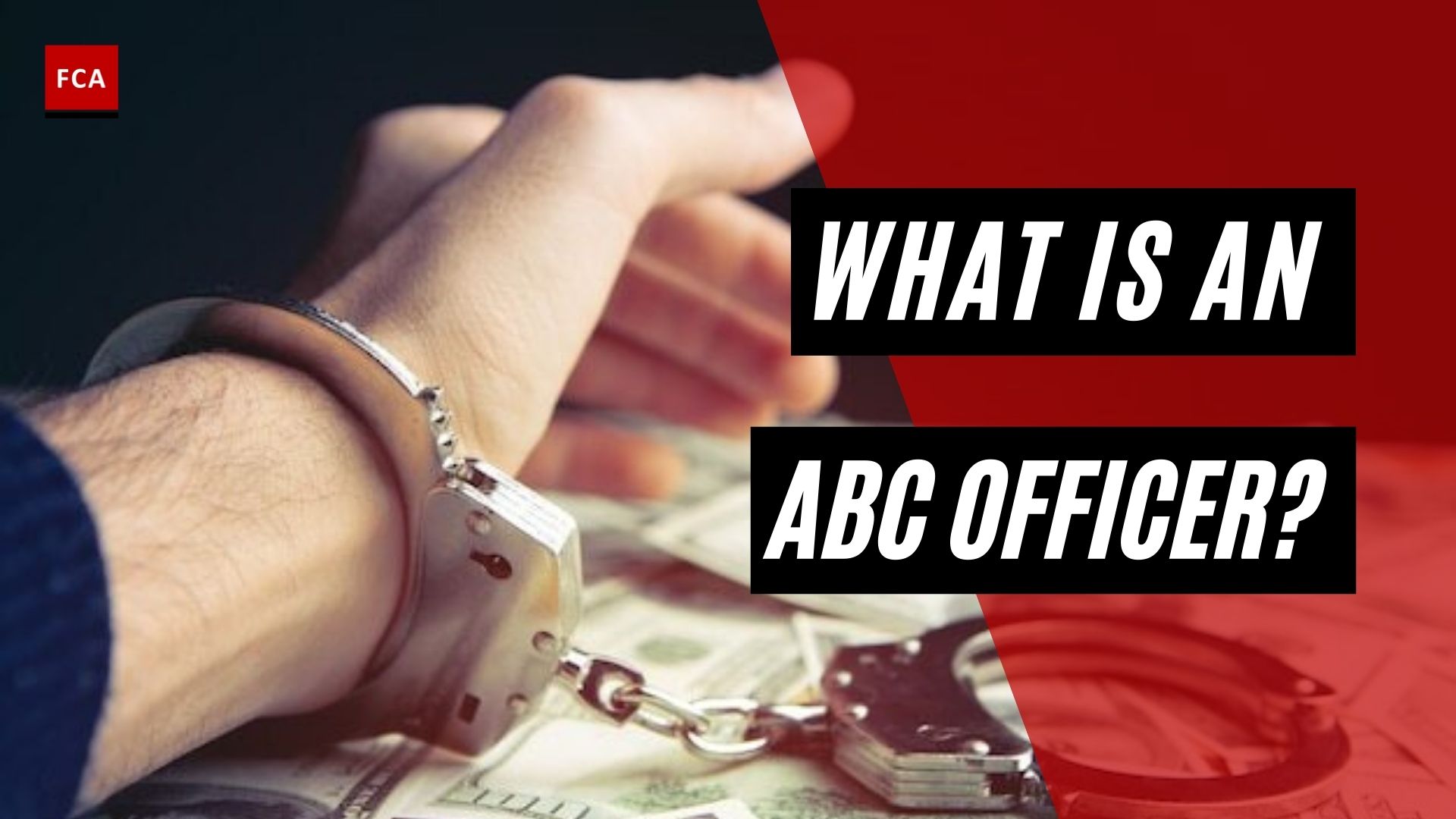 What Is An ABC Officer? The Anti-Bribery And Corruption Officer 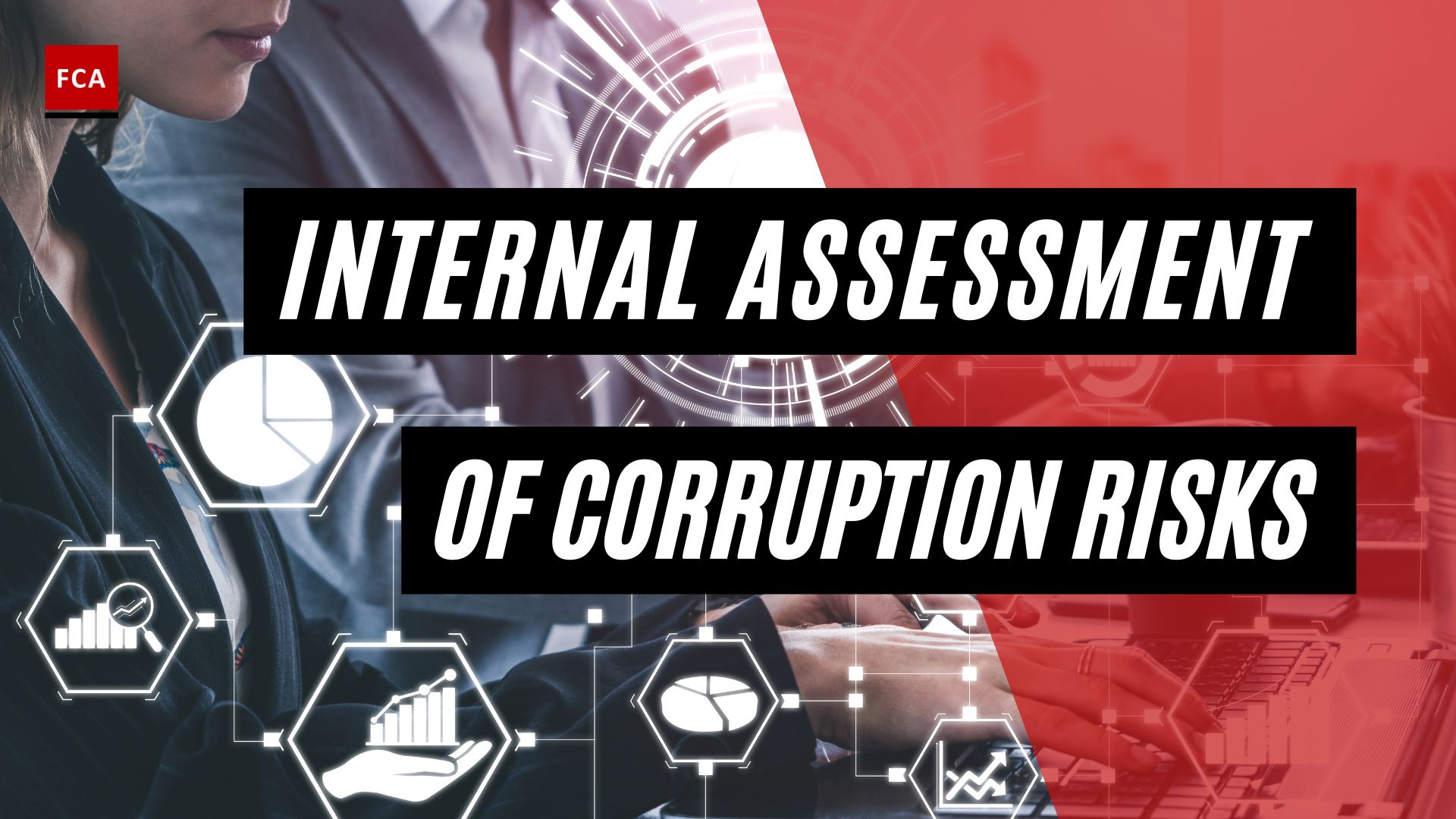